It’s amazing how something as small as this little hand crafted bear can hold so many memories.   When I found it packed away in the things I inherited from my family I was surprised it was still around.   After all,  it is about 30 years old…. 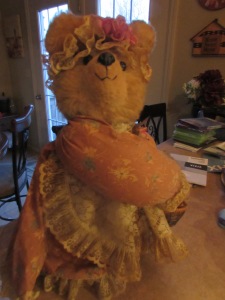 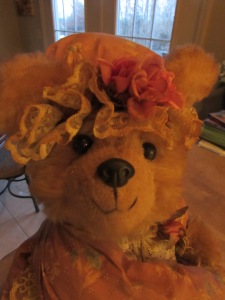 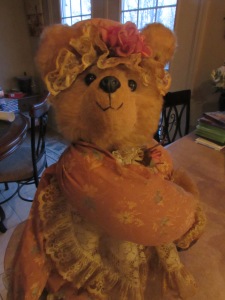 This bear was first seen at a mall craft show while I was out shopping with my sister.   I remember her seeing it,  walking up to it and saying “Oooh Stacey!   We have to get this, Isn’t this just MOM?”  I forget what particular event we were looking for a gift for her was (mother’s day?  birthday?) but we both decided that our mom would love this country looking mama bear as a gift.     It cost something like $60 dollars and we took it home.   I don’t remember if we even wrapped it  (we must have)  but I remember mom liked it.    After that she placed it proudly in her home.    First it was living room décor,  then for some reason mom moved it into the kitchen.   She displayed it on top of our refrigerator next to a few antiques she also kept up there.   It stood untouched up there by human hands,  but what did touch it unfortunately was the same thing that took her away from me way too soon.   Cigarettes.    She was a lifelong smoker and thought nothing of smoking one cigarette after the other.    One of her favorite spots to sit and smoke was in our kitchen.    When I grew up in that house, I didn’t notice how pungent the cigarette smoke was in there… it wasn’t until I moved out on my own and would return for visits when I couldn’t be in there for any length of time without needing to step outside for air.   The nicotine smoke got on everything…  the walls, furniture, all of mom’s knick nacks all over the house,  in my hair, clothing and of course…. the bear in the kitchen on top of the refrigerator.  She had smoked so much while sitting in that chair that there was a thick yellow spot on the wall right above where she sat.    Everything in the house that wasn’t regularly dusted became caked with that nicotine gunk.  I also received an antique toll house cookie jar that was up on the display shelves around the kitchen that took me having to soak it in hot water and soap for  several days in order to scrub the layers off of it.    As for the bear,  I vaguely remembering seeing it during one of my last visits to see mom before she went into hospice.  The years had not been kind to mom’s bear.  Her white lacy apron had turned dark and yellow from the smoke and it had a layer of ‘gunk’ all over her,  she was also layered with a pretty thick amount of cobwebs.   Up until that last time I always expected to see it in the same place in the kitchen,   then after that day when I saw mom for the last time I kind of forgot about it,   when mom died a lot of the things I related to her sort of faded from memory.  Maybe it was a way subconsciously I was protecting my heart from completely breaking.    Whatever the reason,  I briefly forgot about many of the things that were in her house.

After mom passed away I know the house was packed up by my sister and her two boys.    I wouldn’t have thought in a million years that the bear would have been salvaged,  I mean.. mom treasured it because it was a gift from her daughters but if someone else would look at it they would see a grungy old craft project.    That’s why I was so surprised to find it in one of the boxes.     It means a lot it was saved so I could see it one last time and reminisce… but I don’t think I can or even should keep it.    As much as the sentimental value of this is priceless,  I can’t see how I can properly clean it so it would look decent to display in the house. It’s in great condition for being 30 years old,  seriously!   and  It doesn’t ‘stink’, but it’s grungy. ..   I don’t have the heart though to just throw it away yet,  so I’ll need to work up to it slowly and probably with a lot of tears.  (yeah, I’m a sentimental softie)    I am proud to be able to share these pictures of mom’s bear with you on here.    Mom loved it so and I know she would have wanted people to know that.

Thank you for reading this and allowing me to share this with you.    When you look at that bear’s smiling face holding that basket of dried flowers just know that it was that smile that prompted two girls to purchase her for their mother 30 years ago for a present.. and after that it’s all history